H Glass company is proud to be one of the last producers of traditional Czech glass buttons in the region of the Jizera Mountains. The production of these buttons, together with glass beads and imitation Jewelry made this part of the Czech Republic world-famous and it has become part of its cultural heritage. 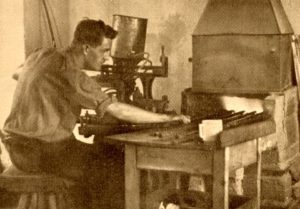 The history of glass buttons begins back during the 2nd half of 18th century. The most prominent producers could be found in villages and towns of Smržovka, Janov nad Nisou, Josefův Důl, Lučany nad Nisou and of course in Jablonec nad Nisou. They became important employers for the region, since they needed craftsmen of various skills.

However, originally, only glass insets for metal buttons were made. Later on, the technology gradually improved so it was possible to solder the metal loop shank onto the body of the glass button. Therefore, initially low-quality products were soon replaced by more sophisticated ones and glass buttons became more and more popular. 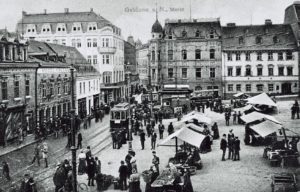 During the second half of 19th century, the demand for original glass buttons made by Czech manufacturers experienced a sharp growth even though only 5 types of black glass buttons were made in those times.

Thanks to increasing interest and growing competition from other parts of Europe, there was a pressure on diversification of the production Thus, lampworked glass buttons, both wound and blown were introduced.

In the 1870’s glass buttons from Jablonec were first hand painted in great quantities. In the 1870’s a crisis slowed the production and sale of glass buttons but in 1887 the development of imitation pearl buttons was instrumental in the future of the Jablonec button. Quality and artistic merit became the driving force rather than mass production of low quality items. 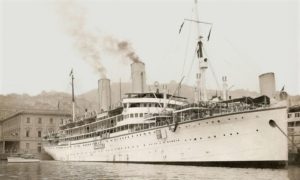 Fun fact – The production of glass buttons and glass jewelry become so significant for Austro-Hungarian Empire it was no surprise that one of the steamliners of its fleet was named „Gablonz“ (= Jablonec in German). This ship carried products made in Jablonec to India and other exotic areas.

By the end of the 19th Century button production consisted of several thousand designs, from cheap pressed to luxurious cut and highly decorated buttons. However competition, foreign import duties and unfair reproduction almost destroyed the industry once again. This was overcome by applying for patents and developing new technology to speed up production and reduce costs.

In 1900 there were five factories involved in making buttons in the Jablonec area, forcing small scale producers out of the market. In 1900, 2329 tons of glass beads and buttons were exported. The beginning of the 20th century was a volatile time again, hit by over production of inferior buttons and competition from the new Japanese, Indian and Chinese glassworks. The button industry stagnated until the end of the 1st world war.

The glass button industry was at its most stable between the wars. Centralised production had reduced costs. Competition had once again forced manufacturers to produce luxury buttons using techniques that could not easily be replicated. The button industry already had its exact pressing molds, the production of which was a financial burden for foreign competitors. One third of all Jablonec buttons exported between the wars went to the USA. The whole situation was to change after WWII with the start of expropriation and nationalisation.

Do you have any questions about Czech glass buttons?

Feel free to e-mail us. We are always happy to share our knowledge about history of glass buttons.